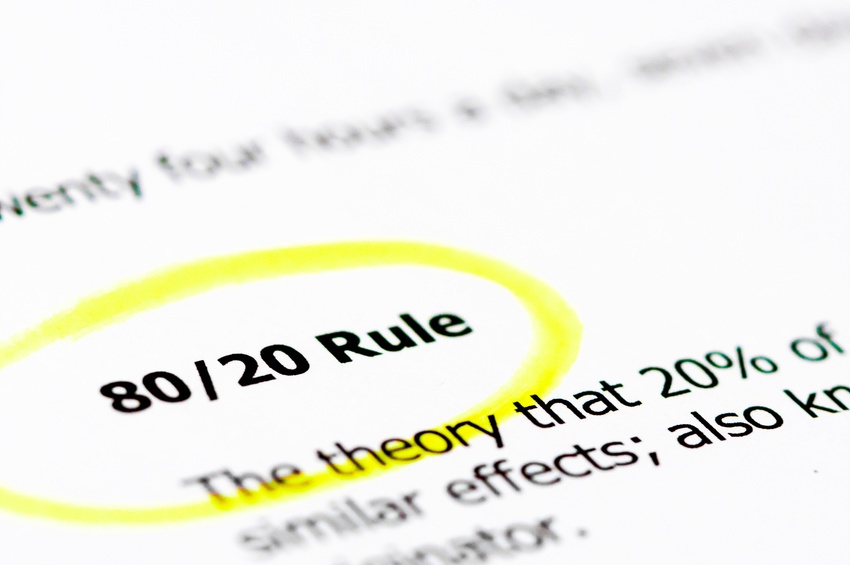 Pareto’s Law, or Principle as it is sometimes called, states that 20% of any input gives 80% of its corresponding output, and that 80% of input will only yield the remaining 20% of output. This Law shows up everywhere.

You can use this same Law to create sustainable change by identifying the small number of things that will give you the “biggest bang for the buck” and then concentrating your efforts on them. This will give you the momentum you need to reach that magic tipping point where it’s easier for the organization to change than it is to revert back to what it was. Think of it as a kind of “point of no return.” It’s not that you don’t go back because you are unable to. Instead, it’s because you don’t want to. The status quo has become undesirable.

Why doesn’t this work?

No doubt, you’re asking yourself why things rarely turn out this way. Why is that it seems to be easier to drift back to what you don’t want than to sustain what you do?

It’s because the wrong things were emphasized at the beginning.

When you laid the foundation for the changes you wanted to make, you assumed that certain things were fine as they were. You may have felt that there were a few tweaks that needed to be made; but on the whole, you would have said that you knew where the problems were and that it was there that the reforms needed to take place.

Your senior leaders assumed that organizational change was being inhibited by factors that actually yielded only 20% of the results. It felt like these were the right problems to focus on because there were so many more of them than the few that actually brought about the greater, overall change.

That’s why they were misled.

A well-known approach to any problem is to start at the end, and then ask yourself what has to happen just before you get that result. From there, you work backwards. Generally, this is what we do in project management.

You can do exactly the same thing when you look for reasons why organizational change fails. Go to the point of failure and ask yourself what happened. What action or step was taken, or procedure followed that resulted in the failure to change? Keep asking yourself what caused this to happen. Don’t assume you know.

You need to also recognize that there is likely to be a number of causes in unequal proportion that taken together bring about a given result. And you have to remember that ratio also. Even though there probably are several causes, together they will explain a lot. That’s because it’s not the volume of input that matters; but rather what comes out of the other side.

When you start to blame people, no matter who they are, then ask, “Who does what at the greatest point of influence?” Then continue with the process. This is key point because without it you may assume that the fault lies with lower level employees, when in fact it’s a supervisor or manager who has failed to do his or her job. Employees do make mistakes; but they’re only as good at what they do as their managers will let them be, or the internal systems in the organization will permit them to be.

For example, you can’t blame them for resisting change if the results from doing so will make things worse off for them. That’s human nature.

Here’s another example. Let’s say that you want them to be more creative and to show initiative. You can’t reasonably penalize them for failing to do so if they’re being micromanaged. Scarcely anyone will do that if their supervisor is looking over their shoulder the whole time. It makes people self-conscious and, if it goes on for very long, they’ll spend all their energy trying to anticipate the whims of the manager, rather than getting the results that you say you want.

Everything is interconnected. You can’t separate one cause from another completely. There will always be good reasons why one thing or another happens. And if you try to find that one thing – that “silver bullet,” then the chances are high that you’ll miss the root cause.

Think about the word root. With very few exceptions, roots are buried in the ground. They aren’t going to be where you can see them easily. You’re going to have to dig for them. And so to assume that the problems you have are limited to what you can see is a recipe for failure on the path to organizational change.

If you want to sustain organizational change, then you have to assume from the beginning that there are core reasons why you’ve been unable to make it work in the past. You’ll need to think about how they’ve worked together in the past to defeat your best efforts, and then you’re going to have to tackle just them. Don’t allow yourself to be misled by the myriad of possible causes. Find the ones that create the greatest impact, good or bad, and solve them first.

Guest author Jesse Jacoby is Managing Principal at Emergent (www.EmergentConsultants.com) and a recognized expert in business transformation and strategic change management. He and his team partner with Fortune 500 and mid-market companies across North America to deliver successful people and change strategies, supporting a range of business initiatives including organizational restructurings, technology deployments, strategic growth initiatives, mergers, and outsourcing.